Shane Todd: The Marine Managing a Different Kind of Risk

Even though he’s no longer overseas, Shane Todd still defends and protects the United States. Well, at least the businesses. As a risk response manager Shane has gone from operating a wrecker to ensuring a bad review doesn’t wreck your reputation.

Shane deployed once for combat in Afghanistan in 2012, and again in 2014 to Romania. The second of which was an extension he requested after his four-year contract expired.

Serving as a wrecker-operator, retrieving damaged or sometimes destroyed vehicles he left the core at the rank of Corporal. 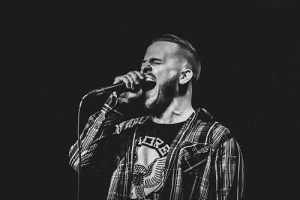 His civilian career began as a hotel manager working long, unforgiving, and odd hours. Shane learned right away the value of reputation management in hospitality. “Even working for a hotel I felt the wrath of Trip Advisor and Yelp and stuff like that.”

The lessons he learned translated into an appreciation for the business.

Shane highlighted how many different ways Restaurant Reputations helps take care of clients. “To this day I don’t know what fully encompasses the business.” Which is why, despite early struggles with sales, he was quickly able to find his sweet spot.

“I did sales for about six months. Very up and down. I did a month where I was top salesman and then I would have months where I’d only bring in one or two clients. Selling wasn’t really for me.”

Shane then jumped to reviews and responses where he thrived and assumed the role of Senior Account Risk Response Manager. It’s in this role where the experience in the military helps him manage over 50 clients at any given time.

The successful management of so many people and accounts is a direct translation from his experience of standing up for, and sometimes coming down on, the Marines he was in charge of in the service. “If someone sees you want to stand up for them, they’re going to work harder for you.”

Not only does this former Marine showcase his ethic in the hours and effort he puts in, but he also stays busy preparing to release his first full-length album with his band, Brotherhood.

Shane Todd now protects on the civilian side. Thank you for your service Shane, both here and abroad.

Favorite Tattoo: ‘This one is for my Mom so this definitely has the most symbolism, (Pointing toward a tattoo on his biceps that is a combination of Tetris tiles and Scrabble tiles with his late Mother’s name spelled out) but this one was my first and favorite (The popular Eagle, Globe, and Anchor symbol sitting on a bed of flames).”

What book are you reading right now?: “I’m working on reading Paradise Lost. The band that I am in is writing a CD thats going to relate to the series of books so I’m doing some research on how to make it fit.”

<< Includes all basic features plus:
Get Started!

<< Includes all basic & premium plus:
Get Started!